ViscoTec makes a double donation in 2021 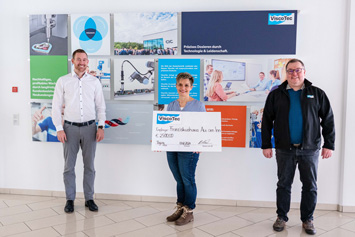 Martina Fiebiger, Chairwoman of the Board of the Sponsors’ Association, at the symbolic presentation of the check by ViscoTec Managing Directors Franz Kamhuber (left) and Martin Stadler (right).

As every year, the dosing technology specialist from Töging donates to a social institution for Christmas. This year, € 2500 will go to the Franziskushaus in Au am Inn. The donation will be used to provide material and non-material support for mentally and multiply handicapped children and those in need. The support is divided into various areas, such as an integrative kindergarten, a remedial daycare center and short-term care – with a variety of therapies.

The aim of the organization is to help children and young people to lead their life as independent and self-reliant as possible. And to promote their physical, mental, and spiritual well-being as well as to support their integration into society. You would like to help yourself? Nothing stands in the way! Whether in the form of a donation (via Sparkasse Gars or Volksbank Raiffeisenbank eG) or as part of the staff – you can apply at any time. Details on the benefits and goals can be found here: https://www.franziskushaus-au.de/ 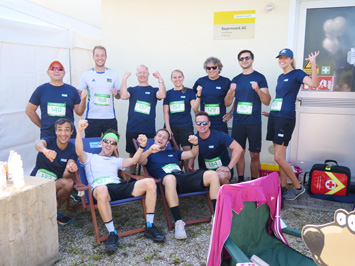 A large part of the ViscoTec runners at the “run-in” of the charity run in Altötting.

Back in the fall, ViscoTec used the “Einlaufen” charity run in Altötting to do some good. For each lap run by all participants, the sponsors jointly paid €18. In total, the run generated a total of €19,836 for the children’s cancer charity Balu. The share that ViscoTec took over as a sponsor was 5,510 €. And a total of 13 ViscoTec employees who took part in the charity run as runners or walkers also contributed to this amount. They completed a total of 306 laps! Among them was the top runner Joan Guixe with 15 laps or 30 km, followed by Susanne Csoti, Sebastian Reinthaler and Sebastian Gerauer with 11 laps each and thus 22 km each. In addition to the cash donation, ViscoTec provided refreshments on site in the form of fruit boxes for the runners and deck chairs for relaxation.

The post ViscoTec makes a double donation in 2021 appeared first on ViscoTec Pumpen- u. Dosiertechnik GmbH.