The risk is in the air – modern battery production 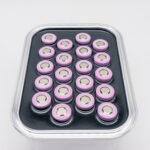 The mobility revolution is closely linked to the question of which battery technology is sustainable, cost-efficient, and safe enough to be permanently established for electric cars, commercial vehicles, e-bikes or two-wheelers.

The operational reliability of such a storable battery depends to a large extent on its clean machining: On the one hand, the individual battery cells must be fixed in the battery housing with specially developed potting compound. On the other hand, the cured compound must be absolutely free of air bubbles and impurities. This is the only way to ensure that a battery can withstand extreme external influences – triggered by a fall or collision, for example – and that any air bubbles do not become a fire accelerant.

The engineers of the Von Roll Group investigated the question of what components, such as a potting compound, must consist of, and how it can be mixed in a process-safe manner. They also had to clarify how the multi-component potting compound could be precisely dispensed into a battery module – a sample component – with battery cells inside. The aim was to produce a safe two-wheeler battery by precisely dispensing the right compound.

Dolph’s Damival 13682 and 13683, two-component polyurethane resins, were used. For the laboratory-scale test, they were mixed from a cartridge in a ratio of 7.14:1 and 7.69:1 [vol] into a dummy battery module made of aluminum and fitted with round cells.

After intensive dialog with the engineers at ViscoTec, the developers at Von Roll decided to use the ViscoDuo-VM 12/8, a valveless 2-component dispenser based on established progressive cavity technology. It is suitable for Von Roll’s Dolph’s Damival, whose two components can be precise and volumetrically dispensed and applied into the housing between the individual cells using this process.

To simplify the process, both components and material were heated – air bubbles could therefore be completely avoided due to the improved flow properties. Once the application was complete, the correct mixing ratio guaranteed optimum curing of the potting compound. Here, Von Roll placed particular emphasis on a dispensing stop that reliably avoided material waste and guaranteed a homogeneous surface of the potting compound in the aluminum tray.

The fact that Von Roll can also count on the same performance characteristics when changing the 2-component material was another argument in favor of the ViscoDuo-VM: The Swiss company specializes in resins that are used across all industries wherever electrical devices and electronic components are used under demanding environmental parameters. The company therefore also focuses, among other things, on the development of sustainable formulations that can be used to extend the service life of parts and components and improve their performance.

Another advantage of ViscoTec dispensing technology in this context is likely to be its modular structure. Particularly with a view to transfer to series production, long maintenance cycles or simple parts replacement at module level are clear added values.

All in all, the 2-component ViscoDuo-VM dispenser at Von Roll shows its most flexible side and can ensure optimum electrical insulation properties in battery production in the future through perfect dispensing. The necessary fire resistance of the batteries produced, can be ensured by precise application of the potting compound, as can their optimum thermal conductivity. In addition, precise dispensing and curing are the basis for demonstrably best mechanical properties of the resins and therefore of the battery. Here you can find more details about our customers and the application.

The post The risk is in the air – modern battery production appeared first on ViscoTec Pumpen- u. Dosiertechnik GmbH.